My first road bike (of my adult life) was a 2002 Lemond Victoire.  It was a wonderful bike, but it had one fatal flaw: it didn't fit me.  Of course it took me awhile (about 4 years, I guess) to fully appreciate this; after all, I had nothing to compare it to.  I didn't realize that hitting ones knees on the front bars when pedaling out of the saddle wasn't the norm, that fairly significant (> 1") toe-front-wheel overlap wasn't a requirement, or that 12.5cm disparity between seat and handlebar height was as appropriate a position for a bike as a Snoop Dogg music video. Apparently I was a little naive.  And by "was", I mean up until a couple weeks ago when I sold that bike and bought a new Habanero Cycles frame.

Habanero Cycles, judging from their site, is a few guys down in Florida that act as a (super-lightweight) middle man for titanium frames made in China.  I think this graphic on the landing page pretty much sums up the shop:

This simple GIF, with its jagged pixel edges and MS-Paint-era aesthetic, eschews modern web design fashions and technologies.  Habanero Cycles with their straight tubes, traditional triangles, and encouragement of 1" head tubes seems to do much the  does the equivalent in the cycling world.

But, perhaps unlike the GIF image above, I think a lot of people would agree that these are really timeless and attractive  bicycles.  I certainly think so.  After all, this is my second Habanero Cycles frame.

Last year, I decided to build a cyclocross bike for commuting, to replace my single speed.  I like riding a single speed, but I wanted a bike that could fit fenders and one that had gears since I was anticipating pulling a baby trailer with it on the weekends.  Here was the bike in "commuter mode" after building it and before actually making it practical for commuting (adding fenders, lights, switching to compact crankset, etc.): 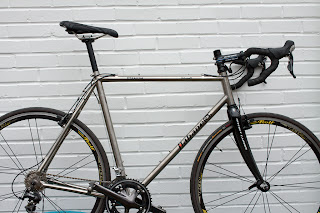 As it turns out, it also works for riding as a cyclocross bike.  I raced in my first cx race this fall and plan to do another in a couple weeks.

My new bike is a road frame, which I have to explain to my non-cycling friends and family is very, very different from a cyclocross frame -- you just can't really tell by looking at it. 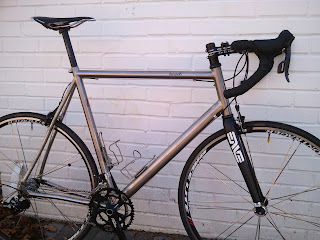 (Yes, I removed the down-tube decals; I wasn't a big fan of the orange lettering on this model.)

I think that I would be betraying the "NO HYPE" mantra of Habanero Cycles if I started weaving word tapestries (or at least potholders) from the cycling reviewer lexicon: "lateral stiffness", "vertical compliance", "soak up road chatter", "effortless climbing", etc.  (but not too many cetera, this is a shockingly shallow vocabulary pool).  I do, however, have a few general statements that I would like to make about both frames:


Perhaps on par with the quality of the frames themselves, though, is the the customer service. I have worked mostly with Mark (I think he does the online stuff for them, and I tend to do more by email than phone) and the customer support has been superb.  We had many back and forth emails where he helped me choose frame size and suggestion other component dimensions to get the geometry I wanted; he's worked with me through some follow-up issues with seatpost slipping (diagnosis is bad seatpost binder bold; he's sending a replacement) -- answering emails on weekends, etc.  I have certainly never experienced such excellent customer service in the cycling industry.

After writing this, I think it's less that I'm addicted to titanium, and more that I'm addicted to the ideals embodied by that "NO HYPE" GIF image.  I like the fact that these bikes don't claim to be anything more than well-built bicycles: they embrace the fundamental triangle design that all other frame designs circle around, use traditional dimensions and geometries, favor strength and durability over weight savings, and represent a really well-crafted product.  I do like the stress-free qualities (low-maintenance finish, no rusting) and ride quality, but I think this is just part of that same bigger picture here.  There's nothing wrong with innovation, but there's often nothing wrong with the original edition either.
Posted by Hans at 5:54 PM